A work in progress.
by Jonathan Eaton 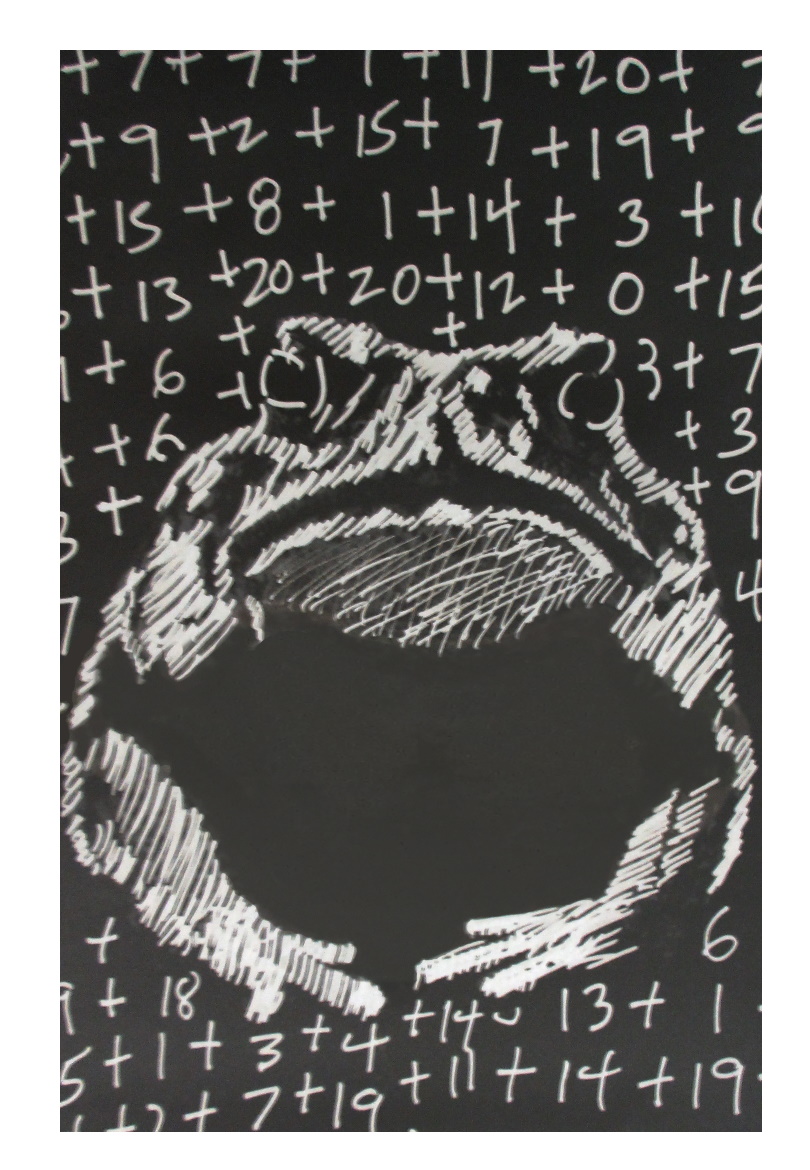 Early arrivals stand around, some holding books, some ambitious, some lost, none aware. The wind chooses one girl, blows her hair into her face. The very recently Mrs. Ada Milton, small, smaller in comparison to the fortress-like front doors of the school, out of which she peeps, sees Robert standing near the girl with blowing hair. He carries no books, fills his cheeks with air, deflates them with his palms. Unclear if he pretends or believes he maketh the wind to blow.

Mrs. Milton calls to him, but he doesn’t turn until shoved in her direction by one of the ambitious. The ambitious, in paying attention, pick up the tab for everyone.

“There’s something I need you to do for me,” she says. He understands, at least, that he is to follow her into the classroom. The room has the suspenseful emptiness of a set waiting for a play. She hands him an eraser, and he understands that as well. He works slowly, and, to Ada’s surprise, is thorough—as though he paints rather than erases. He lays on regular, repeated arcs of thin chalk wash, while Ada works on a lesson. He stands on a chair to reach the top. When Ada looks up again, the board has taken on the appearance of the scaly flank of a great, black, fish, swimming up from the unfathomable.

The ambitious edge closer to the doors just before the bell. There is nothing of heaven or ecstasy in that bell, though it might have something to teach its ecclesiastical cousins. In its limited vocabulary—Duty, Freedom, Fire, Tornado, Nuclear War—it represents authority in its purist form; the word which transcends language.

The ambitious hustle awkwardly through the halls, pushing the limits of a prohibition on running, quick to ummingly accuse those whose knees bend inappropriately. She who would have been first discovers disappointment when she finds Robert already at his desk. An injustice has been done, her victory, tarnished.

In a fair hand, Ada inscribes problems in addition on the great fish. Today, she demonstrates carry-the-one. She finds the pleasure of righteousness in it, the agreement between hand and number that the whelped digit will not be abandoned, but will ride side-saddle on the broad back of an operand.

The ambitious raise hands, the lost lower eyes. Ada knows that the ambitious will raise hands when they don’t know the answer, and the lost won’t, even if they do. Ada calls them all to the board, one by one. Some remember to carry the one, some forget. When they forget, Ada reminds them.

The Eleventh Commandment (according to Mrs. Ada Milton): Carry the One.

Motion for motion’s sake, intensity without apparent purpose, wasps hovering around after the house-lord has swept away the nest. Abrupt changes in direction give the children the appearance of each being afflicted with their own personal natural disaster: Kathy runs, stumbles, and falls as if the earth shook beneath her. Danny spins in the eye of a private whirlwind. Robert watches them like he did the horse-shoe crabs at the aquarium. Ada remembers that he forgot to bring a sack lunch. She had one for him—not for him, in particular—on field trips, she always brought an extra one, for the lost.

The bell decants the children from the playground into the classroom. The children settle down. Reading aloud. Coloring Maps.

The classroom is warm, so Ada opens the windows, leaning to tilt them out. The air that pours over her is as warm as the classroom, but at least it moves. Ada hands out mimeographs, neat columns of numbers in blue pastel.

In the few minutes of silence before the ambitious finish and start to fidget, Ada enjoys thoughts of going home to her new husband. She loves to hear about his day, what she calls (to herself) “the very local news.” At first, he won’t say much, but during dinner he’ll remember something—how the boss was beaming over talk of a potential client, or something clever someone said, or how he told the boss exactly what he thought.

Ada looks over her class. The ambitious are working quickly, not checking their work. The first victim of ambition is care. The warm air has taken its toll – two boys are sleeping. Robert, appearing to study the exercise carefully, doesn’t have a pencil. Ada finds an abandoned #4 in her top drawer, and steps out from behind her desk to hand it to him. Ada notices a black-eyed pea stuck to his shirt.

Clickety clickety gets her attention, and she looks up in time to see the #4 pencil roll, take a graceful turn, and fall off Robert’s desk onto the floor. Ada picks up the pencil and Robert’s un-marked exercise sheet. She gives him a C+ in her grade book.

It has rained a little, recently. A toad will cross Robert’s path on his way home, brushing away the entire previous experience of his day, leaving nothing behind more tangible than chalk dust.