A work in progress.
For Whom the Bell Pepper 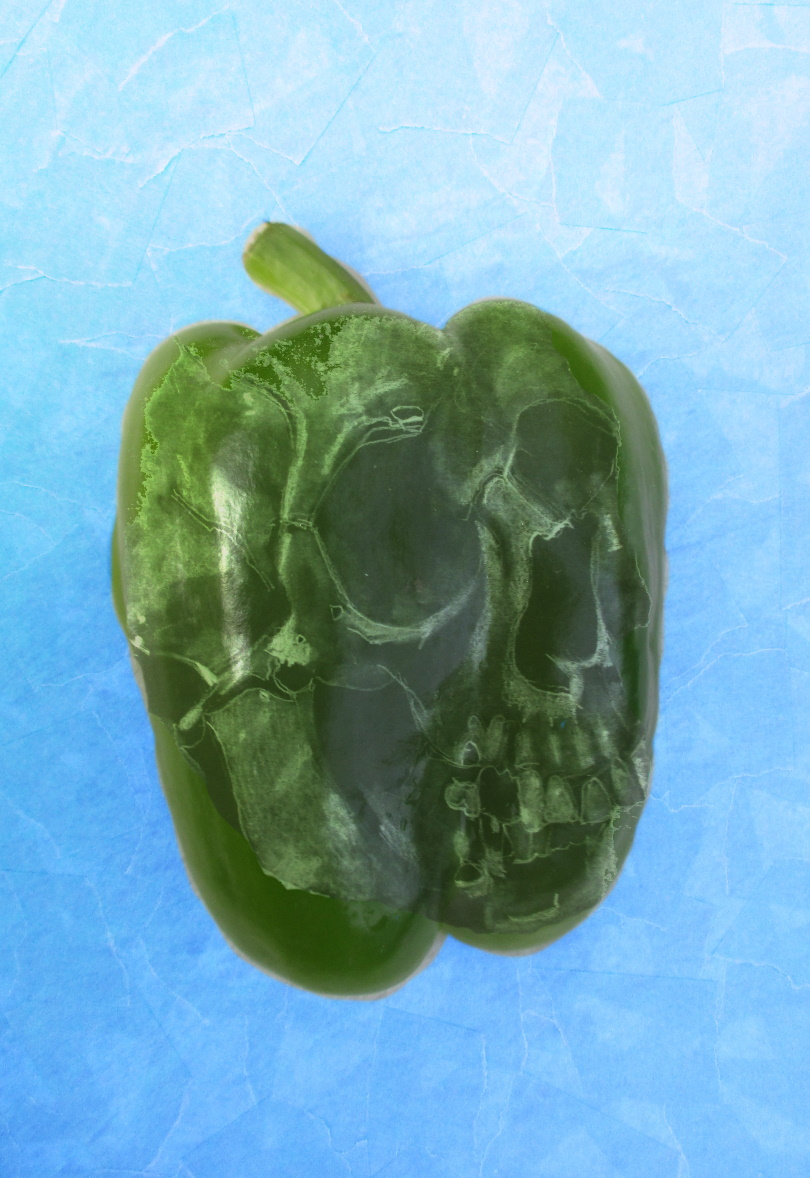 On October the 29th, 2019, at approximately 11:20 AM—the date and time are important, ok?—a bright, thin beam of light entered Olson’s basement through a narrow window near the ceiling. There were no floating, glittering motes in that beam—not a one. Olson had somehow banished them. The sound of the basement was whirrings, hummings, beepings, and Olson’s high-pitched, excited chattering. The smell of the basement was solvents, ionization, and Olson’s anxiety B.O. I don’t remember what he was wearing, except for the gold medallion on a blue strap around his scrawny neck, like he’d just won an Olympic event. Speed-talking, maybe. I see that blue strap around his scrawny neck in my nightly nightmares. I didn’t take a close look at the medallion until later. On the front, a clock with no hands. On the back, nothing. Thank God, I guess.

“If I could plug into the sun,” Olson was saying, holding an open palm under the light, “I could send a grapefruit back to 1977, but with standard household current, the best I can do is send about thirty characters back two weeks. Once I get my generators up and running, I’ll be able to double that or maybe better. As you well know, even information has mass—but fortunately, not much—not nearly as much as a grapefruit.”

I did know. I had assisted Olson with the calculations for converting information to mass some years ago. I still didn’t know what he was talking about.

“Slow down, Olson,” I said, “and run the whole thing by me again—half-speed.”

“Sorry,” Olson said, “I’m just so . . . excited.” Olson pointed at a stack of metal filing cabinets up against the basement wall. “That’s the present. Right now.” He looked up at a large digital clock ticking off the seconds above the cabinets. “Eleven twenty-ish. Now over there,” he said, turning and pointing to another stack of metal filing cabinets on the opposite wall, “that’s the past.”

Let me describe Olson’s “present” in a little more detail. The filing cabinets were crammed full of electronics, and wires were spilling into and out of the drawers. Holes had been cut out of the sides of the cabinets and through these holes one could see blinking LEDs, spinning fans and flickering oscilloscopes. A small and ancient CRT monitor sat on top of it all. On the monitor, a bright green cursor blinked patiently. On the side of the filing cabinet, Olson had spray-painted the word PRESENT in neon orange. It was done very nicely—no drips—he’d probably used a template he’d made for the purpose. He was kind of a neat-freak.

The “past” seemed to me identical to the present, but silent and dark. PAST was spray-painted on the side of that stack of filing cabinets in subcutaneous hematoma purple.

“I type in a message here,” Olson said, retrieving a keyboard from somewhere within the bowels of PRESENT. I set these knobs—day, hour, minute . . . and this last one is seconds—maybe that was overkill? Then again, who knows when you might need seconds—ha, ha, I guess I will, won’t I?—anyway, I set it to when I want to send the message back to, hit send, and, voila—it shows up on that monitor right there—in the past.”

It was finally starting to sink in. Olson had invented a time machine.

“That’s right,” Olson said. “Didn’t I say that? I guess I should have said that to begin with. I’ll send myself a reminder, ha, ha.”

“Have you tried it?”

It was finally starting to sink in. Olson thought he had invented a time machine.

“Here’s what we’re going to do,” Olson said. “You think of a message. You know, something inspiring. A ‘One small step. . .’ sort of thing. Send it back a week, and when I get it, I’ll have it etched onto the back of this medallion. So now I’m going to turn around so I can’t see the message, and you type it in and send it, and when you tell me you’ve sent it, I’ll look at the back of the medallion and it’ll just be there—or maybe I’ll suddenly remember—I’m not sure yet how that’s going to work.”

“Olson,” I said, “have you thought about . . . what this means? The big picture? How you’re going to use it, other than sending inspirational messages to your past self? What are you going to do after that—let me guess—win the lottery?”

“Well, obviously, Malloy,” Olson mumbled. “I . . . I deserve to at least make back what I spent on the equipment—and compensation for my time—don’t I? Someone’s got to win the lottery, don’t they? So it’s me once or twice. Where’s the harm in that?”

“Olson, maybe you need to think this through a little more before you go barging in and changing history. You’ll be changing lives—other people’s—not just your own. This isn’t just about money.”

“Not about money? Maybe not to you, but I had to take a second mortgage out on my house to build this thing,” Olson said, defensively. “I’ve got to get some of that back, or I’m going to be living on the street. And I really need those generators to advance my research. And it’s not like I’m not going to stop mass shootings and terrorist attacks and stuff like that. Of course I will—that goes without saying. But a man’s got to eat, Malloy. And is it so wrong to want a little comfort—a little comfort so that I can focus on saving the world?”

“You’re determined to go ahead with this, aren’t you?”

Olson’s cellphone buzzed. He tapped at it. “Oh! Pizza guy’s here—I ordered us a pizza. Good. We can have some lunch and you can think of a great first message to send to me in the past. Hey, how about ‘Olson, come quick, I need you!’ No, I’m kidding! Don’t use that one! You’ll think of something—but don’t tell me what it is!”

Olson bounded up the stairs and left me alone in the basement. I looked up at the digital clock. Eleven twenty-three and fifty-eight seconds. My own research had to do with certain strange properties of the Fibonacci sequence, and there were the first six numbers. An odd coincidence. That’s probably why I apparently remembered it a little over a year from now.

With a beep and a whir of many tiny fans spinning up, PAST sprang to life. The green bar on the old CRT glided to the right, leaving a trail of characters in its wake:

The green bar blinked a few times, jumped down two lines, and spilled out another line of text.

Olson came down the stairs into the basement holding a pizza box.