A work in progress.
The Suit 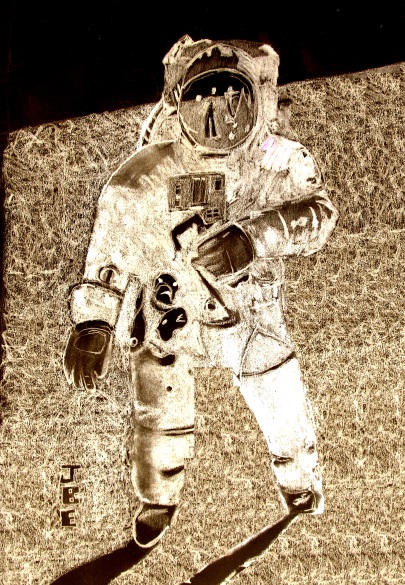 I ACHED for Nanette to be near me, and longed to hear her voice—usually—but not today. Today I wanted her to go away. For one thing, I had a splitting headache. For another, she was expressing more concern for Bruce Kirkland than I wanted to hear.

“He’s over an hour late, and he hasn’t called in,” she said.

“I’m sure he’s fine,” I said. “We didn’t finish the exhibit until four in the morning. Then we had a few drinks. He probably hasn’t even gotten out of bed yet.”

“I tried calling him. I didn’t get any answer. He should be here. This is his baby. Getting NASA to donate a spacesuit to the museum—that was quite a coup.”

“Yeah,” I said, “compared to schmoozing with bureaucrats, building a replica of the lunar surface and the lunar lander was child’s play.”

“Well, the spacesuit is real. And this is a science museum. Reality matters.”

“Bruce told me the suit was never in space. It was only used for exercises here on Earth.”

“So if it was never in space, is it really a spacesuit? I mean, I’ve never been to space—am I an astronaut?”

“I’m sorry I brought it up,” Nanette said, walking away. “Obviously, this is a sore point with you. Let me know if you hear from Bruce. He’s your best friend. You should be worried about him too.”

Bruce told me NASA said Neil Armstrong might have worn the suit once or twice, but they weren’t sure. But I can tell you one person who did wear the suit for sure: Bruce Kirkland. Before we put the suit on the ladder, Bruce wanted to try it on, so I helped him get into it. It looked great on him. It even made his big head look not so big.

“I can talk anyone out of anything,” Bruce said. “Anyone. Anything.”

I hadn’t been exactly honest with Nanette. Bruce and I had started drinking long before we were finished setting up the exhibit.

“And you wanna know what I did that was even better than talking NASA out of a spacesuit?”

“I talked Nanette out of her pantsuit. Wow. She is something else. Helmet.”

“The helmet—put on the helmet.”

I put the helmet on.

Bruce reached for the helmet and I pushed him. He stepped back and bumped into the lander, tearing the Kapton foil on one of the lander’s legs.

An old man and a little girl stopped in front of the exhibit. The old man told the little girl that this was a reconstruction of the first lunar landing, and that he’d seen it when it happened, on a black-and-white TV, long before she was born—before even her mother was born.

Did I put my hands around Bruce Kirkland’s neck? Did my hot breath cloud up the inside of the helmet as I choked the life out of him? Did he grab at my arms and hit at my helmeted head with those fat, useless gloves? Did I laugh because I didn’t feel a thing? Was I horrified when I realized I’d killed him?

“. . . and that’s Neil Armstrong,” the old man said, “about to be the first man to set foot on the moon. There’s no air on the moon—that’s why he had to wear a spacesuit—so he could breathe.”

The little girl stared at the suit in wonder. “When can he come out?” she asked.

“It’s only a reconstruction, honey,” the old man said. “There’s no one in that suit now.”

“It’s time for me to take you home,” the old man said. “Do you need to go before we leave?”

The little girl looked up at him with her big eyes, but didn’t reply.