A work in progress.
US vs THEM 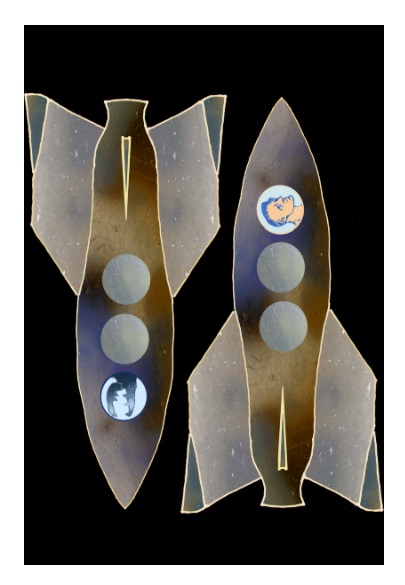 WHEN I CAME TO, I was strapped into the pilot’s seat, the air was hazy (but since I was alive, apparently breathable), and there were maggots everywhere. There were always a few slinking around my ship, tightening a screw or polishing a conduit with their nubby grippers, but now they swarmed over every surface of the ship in the hundreds, if not the thousands, and they squish-popped under my gravboots as I made my way from the flight deck to the engine room. That would be all of twelve squish-pops, but who’s counting?

The good news was that I was alive, and the maggots would be done with repairs in a couple of days. There wasn’t a thing on the ship they couldn’t fix, except for the quantum acceleration core. They wouldn’t touch the core with a three-meter nubby gripper, and for good reason.

Teppop, the last of his technologically and morally superior kind, had shown Us how to make a quantum acceleration chamber, and Them how to make a quantum acceleration core. He thought of Us and Them as his children, and he wanted us to get along, after he was gone. He made us promise, on his death web, that we would try. And we did try, for a while. We shared our art and science, but most importantly, their core fit perfectly into our chamber, and we made lots of beautiful little faster-than-light spaceships together.

That didn’t stop Us from attempting to make a core of our own. “Nothing to it,” our physicists said. “A ton of ultra-pure metallic hydrogen. A pinch of Einsteinium. Three drops of baboon’s blood. We can do that.” We constructed our very first quantum acceleration core (so I’ve heard) in a secret laboratory under what used to be called Wildcat Mountain, and is now known as Wildcat Crater. I bet they have a crater or two just like it on their home planet. We’re not all that different. Come to think of it, that’s probably why we’re at war—Us and Them not being all that different. But what do I know about politics?

And the bad news—do I even need to tell you? The reason I had bothered squish-popping my way from the flight deck to the engine room was to confirm with my own eyes what the damage control panel was reporting: a crack in the core.

The chamber has a cap that screws onto it just like a lid onto a jar. Getting the cap off so I could look at the core wasn’t difficult, but I had to be careful I didn’t get it moving too fast. The cap weighed a half-ton on Earth. It didn’t weigh anything out here, but it still had mass, and that was the problem. Get it tilted just wrong and you’d have a hell of a time getting the damned thing back on. So I applied just enough lefty-loosey to get it turning oh-so-slowly, then I backed off and let it do the rest. When the cap had risen a half-meter above the core, I put my hand on it and pushed down gently until it stopped rising, but I let it spin, since the spinning would help keep it aligned.

I pulled the core, cursed, and then, rather pointlessly, put it all back together. When I was done, I squish-popped back to the flight deck. A rather large maggot had taken advantage of my absence to climb into my seat, where it throbbed spasmodically as it repaired a burn-hole in the fabric with some goop it was pumping out of a posterior nozzle. I peeled the maggot off my seat and flung it against the wall. It squeaked pitifully, but I didn’t care. Fixing the upholstery was not a priority just now.

I asked my ship to scan the battlespace and analyze. The report was pretty much what I expected: we’d gotten our asses kicked. My ship identified scrap (and body parts) from twenty-one of the ships in my squadron. That left three unaccounted for.

“What happened to them?” I asked.

“They ran away and left you here to die alone,” my ship said.

“They must have thought I was dead already,” I said.

Sixteen hours and thirty-seven minutes later, all the lights on the systems panel, save the one for the quantum acceleration drive, were green, and all but a dozen or so of the maggots had dutifully delivered their tiny, mechanical lives to the recycler. I set a course for Ramona, the nearest inhabited planet. Without a working QAD, it would take my ship about forty years to get there. I had supplies enough for a month. I figured I’d take whatever time I needed to record a message for my wife and kids, and then . . . I don’t know, maybe step out of the airlock wearing nothing but my Earthsuit. I was in no hurry to decide—I’d collapse that wave function when I got to it.

I was back home, enjoying the many charms of my lovely wife, when the threat-alarm went off.

“The enemy has closed on us,” my ship replied, “and we are currently torplocked.”

“None. All defensive measures and offensive ordinance were expended in the last action.”

“So you woke me up out of a really nice dream to let me know that I’m about to be smeared out over about a zillion cubic kilometers of space, and there’s nothing I can do about it.”

“Shut off the alarm.”

“Sons-of-bitches!” I yelled. “Torplock them!”

“We don’t have any torpedoes.”

It was satisfying to see Them scurry back to the fringes of sensor range, but the satisfaction didn’t last—they were back in less than an hour. I torplocked Them again, but this time, they didn’t flinch. In fact, they sidled up so close I seriously considered standing in the airlock and lobbing something at their ship. A maggot, maybe, or a freeze-dried pbj. It wouldn’t do Them any harm, but maybe it would piss Them off enough they would go ahead and get me over with. The waiting was driving me nuts.

We went on that way for a long while, Us and Them, floating through space side by side, on a forty-year journey to Ramona. Eventually it dawned on me that they must be just as lame and toothless as I was. Their buddies had left Them out here to die alone, too—probably to go chasing after my buddies.

I figured it was up to me to break the ice, so I sent Them a message on a frequency we used to use when we were all friends, before the war.

“I’m out here because I’ve got a crack in my quantum acceleration core,” I said. “What’s your excuse?”

“Looks like we’ve got ourselves a stone soup situation. Tell you what: you float out of your airlock with your core, and I’ll scoop you up. Ramona’s in neutral space—I’ll drop you off there. Hell, I’ll even buy you a drink when we get there.

It took Them a week to say No thanks.

I was starting to worry I wouldn’t get a deal done with Them before I starved to death, but I didn’t want Them to know I was desperate, so I said, “Suit yourself,” and while I waited for Them to chew on that, I finished the recording I was making for my wife and kids, and made a few other preparations for leaving my ship. I was chowing down on the very last of my rations when I got their counter-offer.

“Tell you what,” they said, “you float out of your airlock with your chamber, and we’ll scoop you up. Ramona’s in neutral space—we’ll drop you off there. Hell, we’ll even let you buy us a drink when we get there.”

I shut down the ship’s thrusters so I wouldn’t have to wrestle the ton-and-a-half chamber against the acceleration. They shut down their thrusters so they wouldn’t leave me and my precious chamber behind. It took me the better part of four hours to get the chamber in the airlock and myself suited up. I opened the outer hatch while there was still a little pressure in the airlock. A gentle whoosh sent the quantum acceleration chamber, with me clinging to it, away from my ship. When I was clear, I spoke to my ship, the thrusters fired up, and she was gone.

“Why did you do that?” they said. The sound of Them inside my helmet was unnerving. Apart from translating their language to mine, they had made no attempt at all to sound human. I couldn’t tell if they were furious or curious.

“You think I’d let you take my ship as your prize, and I’d go home with nothing, and probably get court-martialed, to boot? That wouldn’t be fair, would it?”

“Then come get me. I’m getting thirsty.”

And here they come now, to scoop me up.

I doubt they plan on going anywhere near Ramona, but I don’t think they’ll space me. They’ll take me back to their home planet, where I’ll be squeezed for information on how to build a chamber. I don’t have a clue how the chamber works, and they probably know that, but they have to try, just like we would, if we had caught one of Them.

My ship, on the other hand, is an expert on quantum acceleration chambers, and with the help of her maggots, she can fix one up any way you like. So it doesn’t matter whether they decide to chain me down like a wild beast, or send me floating away like a soap bubble. When they throw the switch to power up the QAD . . . well, I don’t know if it’s possible to make a crater in deep space, but if it is, they will.

To my darling wife: I hope you waited for me for a little while—but not too long.

To my beloved children: The war has been going on for a hundred years already, and I have no reason to believe it won’t still be going on forty years from now, when my ship takes up an orbit around Ramona and you receive this message. I hope we have inched closer to victory by then, but if not—if the war seems like a promise as empty and cruel as deep space—don’t despair. Remember that even lame and toothless, I bested Them in battle.

Chalk one up for Us.